From this religious division emerges the cultural divide. On one side are those who, in response to their conservative religious beliefs, are pro-life and support prayer in the schools, the display of Christian symbols in public facilities, and publicly-funded religious social services. The Republicans who represent these conservatives in Congress vote for constitutional amendments to ban flag burning, declare the U.S. a Christian nation, allow tax-exempt religious organizations to engage in partisan politics, and favor limitations on the First Amendment to combat speech and symbols they perceive as pornographic or unpatriotic. These representatives are anti-women’s rights, anti-gay and lesbian rights, anti-affirmative action, anti-welfare, anti-organized labor, and anti-tax; but they support subsidies to oil, mining, and agriculture.

Retro American religiosity, often magnified by a belief in Biblical inerrancy, has resulted in a dearth of scientists, inventors, innovators, entrepreneurs, and captains of industry-that is all the people who build modern economies.

Education and science are major artifacts of culture. By every measure of excellence in education, at every grade level, and in every subject-arts, science, and technology-Metro America almost always excels.

To get started and take a shot at taking down one of these massive prizes, visit one of the best big win casino on the internet…

At the elementary and secondary levels, per-pupil expenditures are much lower in Retro states: 19 Retro states are below the mean versus only 7 Metro states. There is only one Retro state in the top quartile, but ten in the bottom quartile.

Metro states have, on average, four times as many Challenge Index high schools as Retro states and twice as many per unit of population.

The same pattern prevails in higher education. We used U.S. News and World Report’s 2004 ratings of 110 liberal arts colleges and 126 research universities to study these patterns. Among research universities, the difference was greater-only two Metro states lacked a rated research university versus nine Retro states. Bringing the difference between Retro and Metro science and technology into sharp focus is the 2003 list of the world’s 50 top achievements in science, engineering, commerce, and public policy, compiled by a Scientific American advisory board made up of 35 of the world’s leaders in science and technology. Of the 50 scientists, teams, and organizations chosen, 40 were American and all of these were from Metro America.

The Metro Side of the Cultural Divide

On the other side of the cultural divide are the religious moderates and seculars, Democrats and moderate Republicans who are committed to education and science; who want the arts to flourish; who are accepting of differences in ethnicity, gender, and sexual orientation; and who want a clear division between church and state. Their congressional representatives support affirmative action, public education, childcare, and other services needed by working parents, as well as progressive taxation. They oppose tax cuts for the wealthy that undercut progressive taxation, and they oppose subsidies and tax shelters for corporations. 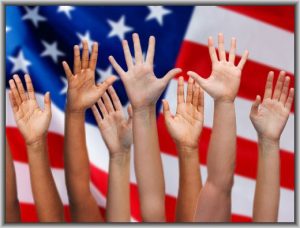 If America is ever to be the true United States, it will be united with the Metro values of inclusion, respect for science and rational discourse, and policies designed to provide physical, economic, and social security for all families; and that includes both the 20 percent that are “old traditional families” and the 80 percent of “new traditional families.” These are the values that will undergird a United America that can provide for all its citizens.

It is the conservative evangelicals and fundamentalists who are now the core constituency of the ruling, radical-right Republican Party. Unfortunately, their path of God, Flag, and Family is leading all of America backward rather than forward.

If the Democrats hope once again to become the majority party, their leaders must accept the reality of the Great Divide. The Metro states have 65 percent of the population. If the Democrats are successful in transforming themselves into a Metro American party, it would give them overwhelming majorities in both presidential and congressional elections and more than offset the advantage the Republicans have in the Senate.

Once the Democrats establish themselves as the majority party, they can set about binding the nation back together — a nation based on our better natures rather than our worst. Both Metro and Retro America’s citizens deserve a modern economy and a society free from the dead weight of racism and religious obscurantism. We deserve national security based on multilateralism and the rule of law, not on unilateralism and empire and constantly under siege. We deserve economic security and a level playing field where all citizens, regardless of class or ethnicity, have a chance to carve a slice of the American dream. We deserve an intact Bill of Rights — especially the right to religious freedom, freedom possible only with a clear separation of church and state. This is President Ronald Reagan’s “City on a Hill,” and all of us, Republicans and Democrats, can join in achieving it.

Between 1991 and 2000, the 25 states that makeup Retro America received $800 billion more in federal payments than they paid in federal taxes. Much of this unfair transfer of wealth from the Metro states was delivered via subsidies to the extraction industries-agriculture, mining, timber, oil, etc. So, who’s the real “welfare queen,” if not Retro America?