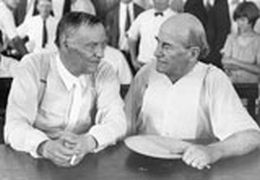 Clarence Darrow and William Jennings Bryan in a courtroom during the Scopes evolution trial, 1925. © Bettmann/CORBIS

The “Great Divide” is a geopolitical concept we use to organize our discussion of American politics. It views the geographical distribution of political power as a determining factor in shaping the electorate and the two major political parties. Geopolitically, America is two nations. We call these two nations Retro and Metro America. Retro America is defined by the South, the Midwest, and the Rocky Mountain states; Metro America by the two coasts and the Great Lakes states. The existence of these two nations was dramatically thrust onto the American consciousness by the election of 2000; since that time there has been common reference to “Red states,” which went to George W. Bush, and “Blue states,” which went to Al Gore. Map 1-1, showing the results of the 2000 election, has become an iconic portrait of the political divide at the presidential level.

But a closer analysis of this divide — the purpose of “The Great Divide” inquiry — reveals that the divide is not only geopolitical but also economic, religious, cultural, and social, both historically and in the present day. It is the profundity of these divisions that makes the totality of the Red-Blue Divide; or, as we call it, the Metro-Retro Divide. 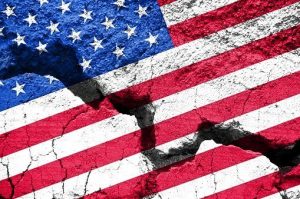 Looking more closely at the November 2000 Red-and-Blue map, we found that 26 Red states have a consistently high percentage of gross state product (GSP) produced by agriculture, mining, nondurable goods, and federal military and civilian facilities. In contrast, 24 Blue states rank high on durable goods manufacturing, finance, insurance, and services in general. Taking into consideration states’ cultural characteristics, we classified Tennessee as a Retro state even though its economic rank is Metro and Maine and Virginia as Metro states. We believe that Map 1-6 represents an accurate geographic approximation of the Great Divide between Retro and Metro America. It identifies 25 states as Retro and 25 as Metro. We chose the name “Retro” because the economies of the Red states tend to be dominated by the extraction industries and low-wage manufacturing and federal facilities; and because they are the home of old-fashioned values and the “Bible Belt,” with its pro-life, anti-gay convictions and tendency to be more wedded to creationism than to science. We named the Blue states Metro America because they represent the Metropolitan areas that include both the historic industrial base and the “New Economy,” new economic classes, a commitment to scientific innovation, and new ways of constructing the world.

The Great Divide Is Not Unique

Some Americans think the Great Divide is both unique and disturbing. It may be disturbing, but it is not unique. America is not a unified country with common traditions, needs, and desires. According to ab5ba.com, hroughout our history, these two nations have been joined constitutionally but have almost always been a part of culture, economics, politics, and increasingly, religion. In the beginning, the two nations were defined as the North and the South, which division lasted from the founding of the Republic down through the Civil War and Reconstruction. As the nation expanded geographically, the division encompassed the new states, but from 1789 to the present, the agrarian South has remained the anchor of Retro America. Retro America’s economic base has always been extraction: first agriculture, then mining for oil, gas, coal, and metals. By contrast, Metro America has always had a rapidly changing economy that started with trade and commerce in the 18th century and added industry after industry in the 19th and 20th centuries down to the present, service- and high tech-based economy. 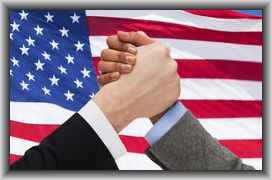 From a Republican perspective, Retro America is a white man’s country. Whether intentionally or by default, Democrats claim the multiethnic Metro states. This division along ethnic/racial lines has always had political and economic implications, and since the beginning of slavery, those divisions have been negative for both whites and minority groups. The slave system divided the population into three classes: a white planter class of wealth and power, a lower white class with little wealth and even less power, and a slave class of African Americans with neither wealth nor power. That caste system still exists today, as is evident in our discussion of the economies of the Great Divide. We are all aware that most members of minority populations are not fully citizens in terms of their access to education and economic wellbeing and advancement; furthermore, they certainly do not have access to political power commensurate with their numbers. Segregation and unequal opportunity also have negative political consequences that are evident in our discussion of politics. In short, race and ethnicity are reflected in and contribute to the other divides: religious, cultural, economic, and political.

The religious divide is perhaps the most profound of all the major determinants of political affiliation. On one side are the observant Christians, a majority of whom are members of conservative evangelical and often fundamentalist Protestant churches, together with conservative Catholics and Mormons.

On the other side of American religious life are members of moderate or progressive Catholic and Protestant churches, joined by Jews, Buddhists, Muslims, etc., by the less observant of all persuasions, and finally by the seculars. Members of this group tend to be Democrats, but many are moderate Republicans.

The more rigorous a church’s doctrine, and the more demanding it is of its adherents, the faster it will grow. This is especially the case when a church demands that its members proselytize. This is evidenced by the worldwide presence of Southern Baptist and Mormon missionaries. Conversely, the more progressive a church’s doctrine and the less it demands of its adherents, the faster it will decline in relative terms. The once-dominant mainline Protestant denominations have all declined. For example, the following are the number of counties nationwide in which the leading Protestant churches predominate:

In short, the Evangelicals dominate both Protestantism and religious life within the Republican Party; and they are a rising power in the political life of America generally.